Join The Chamber for a trip to Germany and Austria! 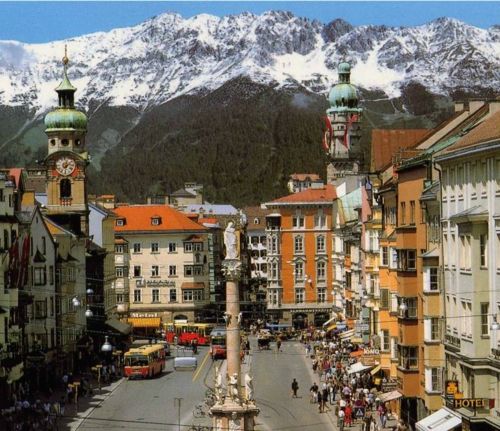 How would you like to be traveling Austria and Germany this week a year from now? You can! The Newnan-Coweta Chamber, in partnership with the Georgia Association of Chamber of Commerce Executives (GACCE), has announced plans for A Taste of Tyrol-Innsbruck, Austria, featuring Oktoberfest, set for September 30 to October 8, 2015. 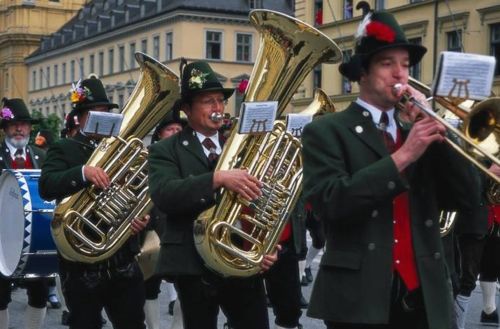 Our home for the seven nights will be Innsbruck, Austria. Innsbruck, the capital of the Tyrol, is located in the Alpine region of Austria, in the valley of the river Inn, at 1,000 feet above sea level. It is surrounded by mountain ranges and numerous peaks which reach an altitude of approximately 8,000 feet above sea level. The city has 140,000 inhabitants and hosts one of the oldest universities in Europe. Innsbruck is an excellent vacation destination and is best known for its rich cultural heritage and great location, as it is only a stone’s throw from Italy and Germany. Innsbruck has been the host for Olympic Winter Games twice, in 1964 and 1976. In the town, some 160 restaurants, cafes and bars, most of them in walking distance to the old town, offer traditional Tyrolean and Austrian specialties as well as international dishes. 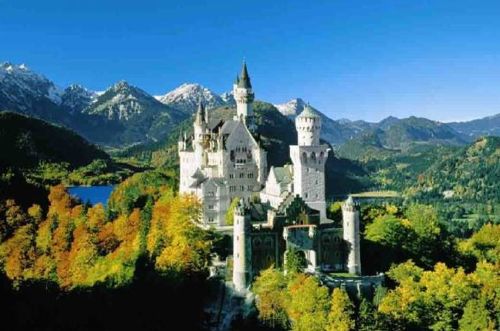 • Seven nights in Innsbruck, Austria, at a first-class hotel

Final payment is due June 30, 2015. Reservations are first-come, first-served, so sign up early to reserve a space. For more information, email info@newnancowetachamber.org or call 770.253.2270. For an itinerary, click here.
at 7:00 AM No comments:

Registration is now open for our October Leadership Skills Workshop of the Business Women’s Network. “Taking Your Seat at the Table” is the topic of this workshop, which will be Wednesday, Oct. 8, from 8:30-10 a.m. at The Chamber. The fee is $35, and the workshop will be taught by Business Coach Rita McMaken. 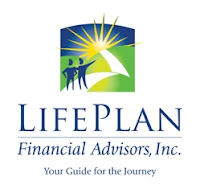 Sponsor for this event is LifePlan Financial Advisors, Inc.

Limited seats are available, so contact us early to reserve your seat by e-mailing julia@newnancowetachamber.org or calling 770-253-2270. Click here to download our Business Women’s Network brochure.
at 7:30 AM No comments: 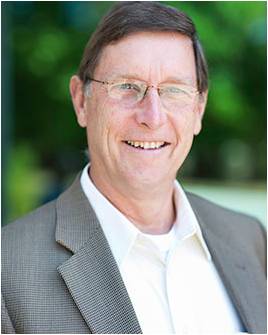 Our next NuLink Early Bird Forum is Tuesday, Sept. 30, and our speaker will be Jim Pace, Managing Director and Lead Developer of Pinewood Atlanta Studios.

You can hear the Pinewood Atlanta Studios story at our Early Bird Forum on Sept. 30 from 7:30-9 a.m. at The Newnan Centre, 1515 Lower Fayetteville Rd., Newnan. Registration is $20 for Chamber Members and $50 for general admission. There will be a Continental breakfast with pastries and fruit, a hot breakfast buffet with french toast, cheddar grits and breakfast burritos, and a made-to-order omelette station. Registration is now open, and you can RSVP by Sept. 26 by e-mailing info@newnancowetachamber.org or calling 770-253-2270.
at 8:00 AM No comments: 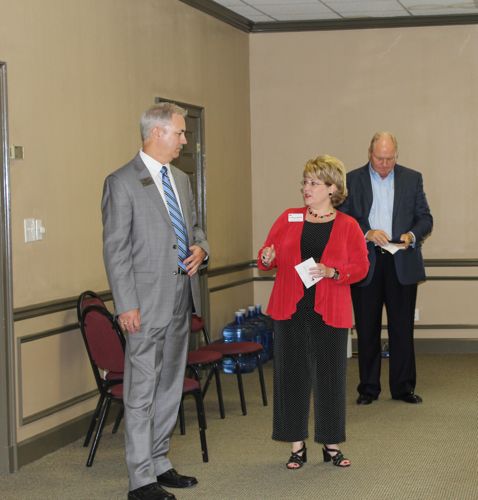 Yesterday The Chamber hosted a Welcome Reception for the new president of West Georgia Technical College, Steve Daniel. Daniel previously served as provost of the Flint River Campus of Southern Crescent Technical College, and before that he worked in the Technical College System of Georgia’s Quick Start division, serving as director of project operations for the Kia Project to develop assessments and training for the opening of the Kia Motors plant in West Point. He has also worked in the private sector, including work in the aerospace industry. Candace Boothby, Chamber President and CEO, noted that with his background, Daniel is "a perfect fit" to lead West Georgia Technical College as it focuses on workforce development in the college's service area. Above are Daniel, Boothby, and Dennis McEntire of Newnan Utilities. 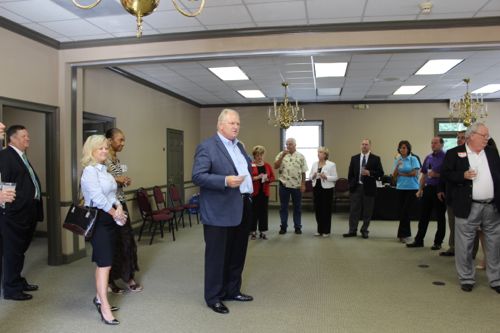 Dennis McEntire, General Manager of Newnan Utilities, welcomes the Chamber members and guests who stopped by to meet Daniel. 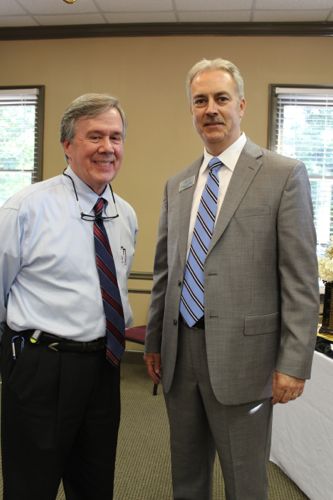 Here Daniel, at right, speaks with Mark Whitlock, CEO of Central Educational Center in Newnan. In his remarks at The Chamber, Daniel spoke of Whitlock's work at CEC and said how fortunate we are "to have a person like that" serving here in Coweta. "I'm really excited about that," he said. He said that at West Georgia Technical College, "We're not just pure academics. Workforce development is our main focus." He also noted that "at the end of the day, that's what we have to do to be successful."
at 2:01 PM No comments: 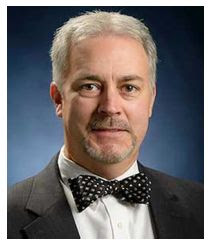 Tomorrow, Sept. 17, The Chamber will host a Welcome Reception for new West Georgia Technical College President Steve Daniel from 4-6 p.m. at The Chamber's office at 23 Bullsboro Dr. in Newnan.

Daniel officially became the president of WGTC on June 1 and said he looks forward to working with WGTC stakeholders to support workforce advancement initiatives throughout WGTC's service delivery area. “There are great examples of economic growth in the West Georgia Technical College service area. I’m excited by the opportunity to further advance the college’s partnerships with business and industry and strengthen the role of technical education in those efforts," Daniel said.

According to the Technical College System of Georgia (TCSG), Daniel served as provost of the Flint River Campus of Southern Crescent Technical College since 2011. Before that, he worked in the TCSG’s Quick Start division, serving as the director of project operations for the Kia Project, working closely with Kia Motors Manufacturing Georgia to develop the pre-hire assessments and post-hire employee training that supported the opening of the Kia Motors plant in West Point. From 2007 through 2011, he managed the Kia Georgia Training Center adjacent to the Kia facility, helping Kia Motors hire and train more than 3,000 team members.

Daniel has a Master’s of Science in Human Resource Management from Troy University, a Bachelor of Business Administration from the University of Georgia, and is currently pursuing his doctorate in education leadership at Valdosta State University. He is also involved in a number of civic and professional associations and committees related to education, economic development and human resources.
at 9:00 AM No comments:

"Lean In" Growth Circles kick off next week! 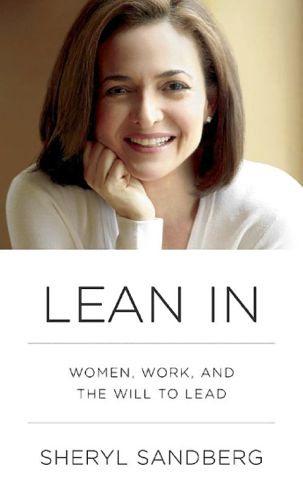 The New York Times called it "a landmark manifesto."

The praise poured in for Facebook COO Sheryl Sandberg's 2013 bestseller Lean In: Women, Work, and the Will to Lead, and you can get in on the conversation when our "Lean In" Growth Circles kick off next week. Led by Coach Rebecca Prien, Esq., the Growth Circles will meet September 18, October 16 and November 20. There will be two groups, meeting from either 10:30 a.m. to noon or 1-2:30 p.m. at The Chamber. Cost is $50 per month, and to sign up you may email julia@newnancowetachamber.org or call 770-253-2270.
at 8:00 AM No comments:

Are you using your free Tools for Business Success? 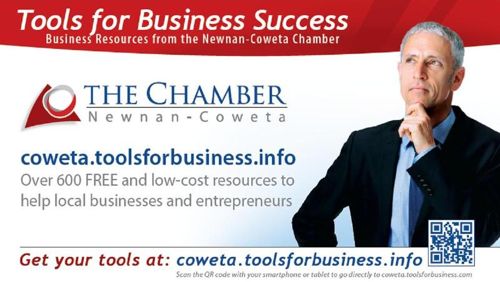 Whether you're looking to start a business, grow a business or protect your business, The Chamber has free resources that can help! Our website offers over 600 free and low-cost resources to help local businesses and entrepreneurs be successful. Here are a few of the things you will find:

• LOCAL resources including info on the economic impact of dollars spent locally, how to make sure you are found locally, and local business and tax incentives for locating in Coweta County.

• START A BUSINESS resources including how to evaluate your business idea, forms needed to start a business, and where to get free help for creating a business plan. 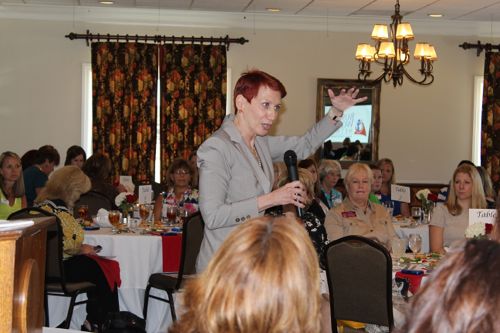 At The Chamber’s Sept. 3 Women of Prosperity Luncheon, Michele M. Molden, Chief Strategy Officer of Piedmont Healthcare, said she is a great believer in the power of women’s affinity groups and believes they are “so important." 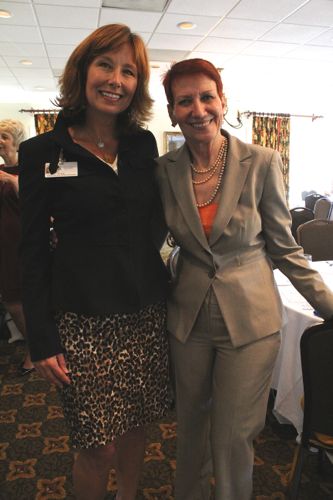 Although such groups began as mostly a social environment for women, that purpose has changed over time, she said, and today they’re all about leadership development. Molden noted that 90 percent of Fortune 500 companies today have women’s affinity groups. “I can’t imagine that’s by accident,” she said, adding that “most of those companies have a business purpose.” She told the women at the luncheon, “You are so blessed to have this environment” that supports women in business. Here Molden visits with Vicki Kaiser, Director of Clinical Innovation & Cancer Program Development at Cancer Treatment Centers of America. 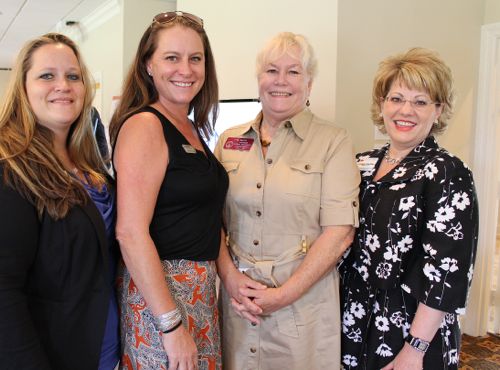 Next week The Chamber will offer some new opportunities for women through our own Business Women’s Network, including Leadership Skills Workshops, Coaching for Business Owners, and Growth Circles based on the book “Lean In” by Facebook COO Sheryl Sandberg. To download a flyer about these opportunities, click here. Above are some of those attending the Women of Prosperity Luncheon, including Samantha Brazie of Progressive Heating & Air, Kim Melhouse-Guerra of Comcast Spotlight, State Representative Lynn Smith, and Chamber President and CEO Candace Boothby.
at 2:00 PM No comments: 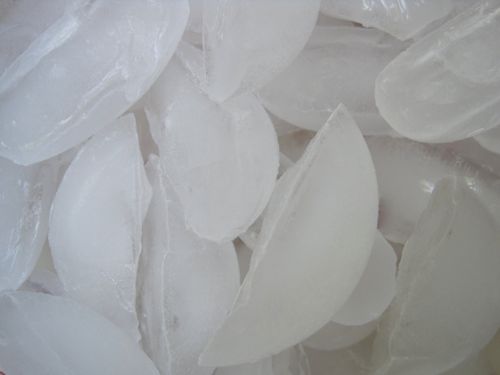 SouthTowne Motors did it. So did Piedmont Newnan Hospital and the Hampton Inn/Newnan. These are just a few of the Coweta businesses that have participated in the Ice Bucket Challenge, the viral phenomenon in which people dump buckets of ice and water over their heads to raise money to fight ALS (amyotrophic lateral sclerosis), or Lou Gehrig’s disease.

Why is this particular fundraiser such a hit? The Ice Bucket Challenge is now being studied by businesses and marketing professionals who want to know what made this fundraising effort so successful. Inc. magazine says it helps that “anyone can participate,” and people are already used to posting pictures and videos of themselves on Facebook. To read Inc.'s "8 Game-Changing Marketing Lessons from the ALS 'Ice Bucket Challenge,'" click here.